MobStyle weekend # 1 : their beef with N.W.A

We're aiming for them Avatar numbers in Hungary and Lenox Avenue in Harlem over the next couple of days because it's officially MobStyle weekend here at The Martorialist, but if you can't find anything about the MobStyle vs. N.W.A beef online which suits your needs then you might as well just write it yourself. 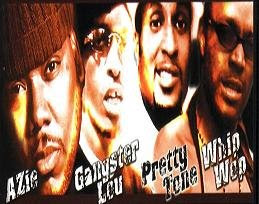 In some ways this was the original east coast vs. west coast spat which even predated Tim Dog's atrocious attempts at baiting N.W.A; MobStyle, who we can pinpoint as the first proper NY thug rappers (G. Rap hinted at it, yes, but he wasn't really a full on thug rapper at that point), took exception to N.W.A describing themselves as gangstas and tossed a couple of subliminals at "fake gangsta mc's" on their first album The Good, The Bad, The Ugly. How Eazy and the boys even picked up on some vague disses from an obscure independent NY tape release I don't know (having said that, both N.W.A and Eazy solo dissed Romeo & Master Rhyme after they were mentioned on a local west coast record called Crackerjack so it perhaps wasn't too suprising in hindsight), but pick up on them they did and Eazy returned fire on Real N*ggaz :

"Back, the good, the bad, the ugly - see?
A lil’ streetwise n*gga, you know me
Rollin’ with some real n*ggaz playing for keeps
but you muthafuckas know who run the streets"

It's rumoured that MobStyle tried to step to Ice Cube at his infamous first NYC solo show at The Apollo in 1990 but hometown-hero Chuck D and his Nation Of Islam cronies managed to convince them to chiiiiill as Ice Cube was a changed man who had nothing to do with N.W.A anymore. N.W.A themselves weren't so lucky during their Apollo show in early 1991, however, when a wolfpack of Harlem goons led by Pretty Tone invaded the stage mid-show and the Most Dangerous Group In The World quickly got the fuck out of dodge. Azie and Pretty Tone then both issued solo releases in 1991, 1992 and 1993 which included explicit dis tracks aimed at the boys from Compton.

"N.W.Gay" and "N*ggaz With Activators" - HAHAHAHA! Thankfully, it gets better with Azie holding counsel as he compares Eazy's squeaky tone to Michel'Le's voice, instructs them to suck a dick with Aids (was this an Ebert getting cancer after Gallo wished it on him self-fulfilling jinx type situation where Azie put a voodoo hex on Eazy?), proposes that Ice Cube left the group when he found out the other N.W.A members were homosexuals, issues threats of violence so their trademark Locs will be a neccesity to cover their black eyes, compares Eazy's jheri-curl to Al Sharpton's shag 'doo, and promises to throw stuff down Eazy's "chim-a-ney". Add in a wah-wah loop with two choice vocal samples and you have Azie's best solo song, like, ever. Not tryna be a contrarian, but I actually prefer this to No Vaseline as far as N.W.A disses go.

Pretty Tone's first dis to Eazy came a year later, opening with a skit where P.T runs up on "that faggot ass n*gga" Eazy and kidnaps him. The rest of the song is then used to detail the various torture methods Tone has in store for Eazy and some kinda dodgy rape fantasies when he adds "stuck up bitches" Michel'Le and Tarrie B to his stash of Ruthless Records employed hostages. I was really hoping Tone would have an accidental "that goes for yo' mama and yo' sister too/and if I'm locked down in jail that shit might go for you"-style moment to AYO! in this, but, nope, he keeps his threats strictly based around beating the shit of Eazy, save for the taunt that he plans to finger-fuck Eazy's neice at his funeral.

I wonder if there was ever any Rick Ross/Freeway Rick Ross type beef between Ghostface and Pretty Tone Capone over Ghost using the Pretty Tone handle? The intro on this even sounds like a proto-classic Dennis Coles rant. That intro is my favourite part of this as I'm not overly fond of the beat when the actual song kicks in, but it's an extention of Kidnapped with a caboodle of other trajectories thrown in including an airport receptionist getting bucked, some self-mythologizing, P.T now adding Death Row, Digital Underground and all "humpty-dumpty broke ass country" west coast rappers to his sights, and that fantastic "dosie-doh, yo, n*ggas don't know" line.

Anybody have an MP3 of Can't Talk Too Long On The Telephone by Pretty Tone Capone from the 1992 Def American Recordings preview tape? That's kinda my holy grail mp3 right there. Okay, so no Pretty Tone album on Def American ever actually materialized because Tone probably wasn't the most corporate-friendly person to have hanging around the Def American offices (best mental image ever : him and Glenn Danzig making chit-chat in the corridor), but how amazing is it that Rick Rubin signed Pretty Tone to his label and put him on a sampler tape alongside songs by Slayer, Trouble, and Brummie metal-hogs Wolfsbane? If only there could've been a Pretty Tone Capone and Andrew Dice Clay collaboration.
Posted by Kelvin Mack10zie at 09:30

Your descriptions are more explicit and entertaining than those tracks themselves. Pretty Tone decides to ape Eric B & Rakim's "Don't sweat the technique" style to diss a group who disbanded at least a year (if not two) years previous. Tim Dog was/is shite (all voice, no style) but at least his diss songs are to the point (e.g. "Fuck Compton" and "Bitch with a perm").

I won't hear a bad word said about Don't Dis Nobody.

Pretty Tone's tracks are more Eazy-E disses than N.W.A disses, but Kidnapped is so much more entertaining than anything Tim Dog ever did, bar his Ric Flair impersonation on Chorus Line.

Great post! Never heard of this beef before. Probably have to check out this Mob Style shit.

YO WATS GOOD HOMIE I LIKE THE WORK U DOIN.. WELL I WAS TONES MAIN PRODUCER I PRODUCED CANT TALK TO LONG,GANGSTER SHIT2,CASE DIMISSED,D.L FOR A.Z,AND SO ON..WHAT PEOPLE DONT KNOW ..WE DID SONGS WIT RU-PAUL,LORD FINESSE,SHOW-BIZ WE WAS WELL ON OUR WAY BUT SHIT HAPPENS TONE IS STILL 1 OF THE HOTTEST BAR FOR BAR RAPPERS OUT N I STILL GOT FIRE BEATS..YALL CAN CHECK OUT MY YOU TUBE AT FREDFLAKGREATESTHITZ....

I'm gonna drop a response blog post to you with a few questions in a couple of days.

@scjoha - u never heard of this beef and neirther has NWA or EAZY-E when he was living.

This is a classic case of REACHIN. When a unknown rapper tries to create a beef. "The Good, The Bad, The Ugly" was a popular phrase. When Eazy Said it, it had nothing to do with their album. They just saw it as a oppurtinity to try to come up off it. Their album didnt make it out of NYC and def not in Cali. The song NWA was dissing Ice Cube and didnt even know these guys existed.

It's documented that they were aware of MobStyle.

thanx for the back up ....if u noticed every verse eazy said mentioned a song on mobstyles album...do ya homework homie!!

This is a classic case of REACHIN. When a unknown rapper tries to create a beef.

Azie cannot be classified as an "unknown rapper" he is clearly well known and well respected, and probably the "realest" rapper ever...

Just because YOU never heard of him doesnt mean shit, just like NWA being a popular rap group. They are the ones who are a classic case of REACHIN' by pretending to be gangsters. Azie and Mobstyle is the most official "gangster/drugdealer rap" period.

Fuck Mobstyle! Still West coast. NWA. And Death row had it locked down at the awards when they dissed Badboy. NY BITCHES

Fuck the west coast!!! They were talking all of that shit because there mad security in the area. Death row had a short run. BIG, Wu Tang, and Nas took that shjne away from Death row.

And that "F Compton"by Tim Dog was the shhhhh!!!

Alot of NY niggas came to LA & got they goofy asses laid down weak ass niggas Biggie, Merlin Santana, Carmelo Anthony got his gay ass robbed alot of them cornball niggas is scary fucc pussy NY on the dead homies Tim Dogg came to LA & DJ Quik made that nigga apologize when them piru niggas stepped the nigga was finna shit briccs ma uncle told me & E40 had biggie shook when he went to the bay E40 saved his life not that it mattered anyway but them bay niggas was finna twist that nigga oh Alpo is a snitch all them so called NY gangstas was testifyin on niggas yall never heard of Raymond Washington Stanley Tookie Williams Angelo White Monster Kody Batman Davis Craig Munson Bobby & Jimmy Or any LA OG snitchin thats FAGGOT ass new york shit the home of dicc ridin bitches

Unknown, I don't know you my brother but you sound worse than the guys who walk around in bedsheets. I'm from NYC, Queens (originally OH) and I don't take offense at what you said. What I do take offense to is how gleeful you sound when it comes to hurting or killing other BLACK men over some NONSENSE. And you wonder why the world calls us "animals" and "savages"? Look how quick you're ready to see a Black man harmed or killed because (I really don't know your reasons) they are from another city? Or coast? Let me tell you a secret, we don't own NY and you don't own Cali, the GOV does! I'm 47 and even back in my wildin days of the late 80's to late 90's I NEVER walked around talking about, "Imma KILL a NIGGA"! I used the word (I dont anymore)and I listened to NWA, Ice T, G Rap, etc. I also listened to PE and X Clan and I knew that was WRONG! I'd fight a white dude in a minute but not my brothers. Dont get me wrong, me and my crew scrapped with other Black dudes but we grew out of it. I dont know if you will ever see this and if you do will you say something fly, IDK! But let me tell u the ONLY Black dudes I'd body! The ones who raped and tortured my daughter and shot her 16 times in 2018. She would have been 31 this year. But for a COLOR? A CITY? A COAST? That's IGNORANT! But if you like doing the work of these White racists fine! But personally I wouldn't let someone use me like that! Peace and HAPPY BLACK MAN KILLING, smh