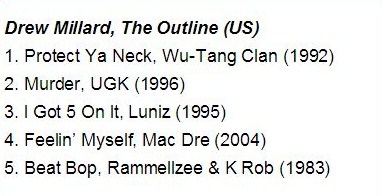 Obligatory wrap-up post of those songs I've played most during the month when Drew Millard had one of the best top fives that BBC best Hip Hop songs poll thing. Is it time for a critical reevaluation of the Millardmeister?


2Pac - Letz Get It On (Ready 2 Rumble) (O.G version) (1996/2019)
Sada Baby - Lame (2019)
BandGang Lonnie Bands ft. ShittyBoyz - Simba (2019)
A-Mafia - Riding Alone (2019)
The Egyptian Lover - 5¢ Camel Ride (Long Version) (2019)
Other notables: stoked to see Open Mike Eagle's Single Ghosts finally getting blessed with a video; the challenge remix of Eatem's Whoop Sum turned out to be a better video than song; gave JPEGMAFIA's new album a spin and was reminded why I can't listen to ANY rapper who wears Doc Marten boots; was gonna peep Danny Brown's new album until I saw El-P appears on there which resulted in a flashback to the Godawful Huzzah remix; is 645AR's Bible & A K the birth of Eunoch-Rap?

Is The Martorialist going to turn babyface?

There's some shocking lists in that BBC thing haha.

The lists were bizarre.some had to be the last 5 songs the person had streamed - one had Aight Chill by Gang Starr at #1 ffs

😄 I didn't even notice that one.

Amazing lists. A post prioritizing the list from worst-to-best including general commentary on the lists would be absolutely amazing.

I'd read one of these for skits.

Don't worry. You ain't missing anything you haven't heard already with that Danny Brown project.

Why Danny Brown thought a song with Run the Jewels rapping over a JPEGMAFIA beat was something his album needed idk (I mean other than for crit-baiting, that is).

I didn't realise that was a JPEGMAFIA beat too 😷