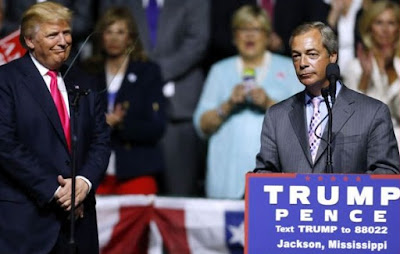 Other notables: Pneumonia doesn't bang as hard as When It Rain, but it's still got me excited for a new Danny Brown album - a notion which was inconceivable two years ago; Childish Gambino-does-Swag Rap is not something I'd enjoy in theory, but I'll be damned if Aminé's Caroline isn't a jam of sorts; All Dat is ya host's favourite TREE song since Naan; not a good month for Nef The Pharaoh since his new single Everything Big and the DEV song he guested on were both disappointments; 38 Baby is the first NBA YoungBoy song which suggests that he has a future beyond being just another trendy teenage gangbanger-rapper; I listened to Young Thug's Jeffery EP thing and came to the conclusion that I should stop frontin' on Pick Up The Phone just because of Travis $cott's co-billing; the rest of Thug's EP? No' Fa Me as a Scottish Devin The Dude might say.
Posted by Kelvin Mack10zie at 11:01

The 2 most slappable faces ever

"Blow it all and make some more,
Get you somebody that can do both"

Good call on the Rae Sremmurd record. I hadn't heard their new stuff outside of, "Look Alive" which was also great.

Recently, I've not been able to quit the Intro from French Montana's, "MC4"

Was going to post it up on the blog before Epic/ Bad Boy removed all reasonable traces of it from YT. There's also a pretty money tribute to Max & Chinx to cap that project. I would definitely recommend hitting up gangstaraptalk or where ever if you've not heard it.

New Thug album is patchy as usual but Floyd Mayweather is a perfect song. A longer version with Travis Scott showed up the next day and the ad-libs are a bit different most importantly the album version has the sharting in the 1st verse.

Black Beatles is nice but it's like the 5th best song on SL2. Definitely feeling Swang & Yoga more.

My early impressions on Ka are that it's audio nytol, and Roc Marciano is better. But I'm sure that will change with more listening.

Favourite Rae Sremmurd song off this new album is Came a Long Way, second place to Real Chill (the one with Kodak Black).

Pick Up the Phone is great. I hate Travis Scott as a person and he's a biter but I do love his production, God help me.

Pick Up The Phone is my shit because it doesn't go on for 2 minutes too long or include a needlessly poncy beat-switch like every other Travis $cott song does. That it doesn't feature Travis $cott too heavily also helps, natch.

I hope there's some sort of afterlife so Yams can hear the Uncle Murda track.

Thoughts on this one?

U.K rappers are so shit 😃