Time to get laid, blow up like the World Trade 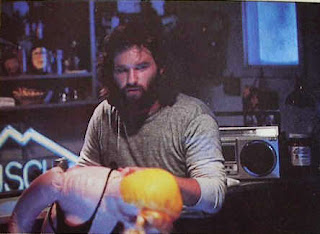 
Imagine if Night was composed as the score to that infamously cut blow-up doll scene from The Thing. Then imagine if the track was intended to accompany extreme close-up shots of Kurt Russell's gurning face as he repeatedly thrusts his todger deep within his inflatable date's rubber love-slot. Hope dude didn't cop Miss Latex Labia from Del Boy & Uncle Albert or else the scene's inevitable climax is not going to be a Sexual Eruption of the Snoop variety.

There's a lotta music on this new John Carpenter Lost Themes album which sounds ripe to be spat over. Unfortunately, you just know that Flatbush Zombies are gonna be the first rappers to have a stab at it. No shots, but I kinda wish someone would take a stab at Flatbush Zombies, Michael Myers-style.
Posted by Kelvin Mack10zie at 09:40

Email ThisBlogThis!Share to TwitterShare to FacebookShare to Pinterest
Labels: Favourites from the flicks, rap, tv blues

Haven't completely made my mind up over the new JC album yet. It's a bit over-produced and complex on some songs.

Would love to see a Martorialist list or possible compilation of quality rap songs that have sampled Carpenter, though.

I think there's loads of '90s Memphis rap that went hard with Carpenter samples, but I don't know shit about most of that stuff, tbh.

Top 5 favourite songs to sample the Halloween theme is the best I can do right now.

The Tower is a personal fave of mine too.

Cool seeing some of his other movies got sampled too, http://www.whosampled.com/John-Carpenter/

Rap songs that sound like they sample John Carpenter scores even though they don't:

Tear Da Club Up Thugs "CrazyNDaLazDayz" had three songs with Carpenter samples, two from "Assault on Precint 13" and one from "Halloween". Mhh, Tricky did "Assault" too, but that turned out unlistenable.

I guess I should probably check that Tear Da Club Up Thugs album out.

Man theres a 6 in The Mornin remake on it and its incredible.

I love that he made a shreddin-ass-shredding synth-prog rock album instead of the tense minimalist opus everybody expected. And it is a little overblown at times but still very enjoyable.