Reasons why I happen to prefer Suga Free to post-Ultramagnetic Kool Keith : Street Gospel is a marginally better 1997 album than Sex Style, and what Keith could only achieve via the aid of a plastic wig that year in the Plastic World video, Sug' managed au naturel in the On My Way promo. "Wait, ‘what do you see?’ said the blind man who heard the deaf man say he saw Suga Free drop the bomb and it went BOOYAH!"

Suga Free - On My Way

Always wondered if there was any truth to the rumour that DJ Quik didn't receive any production royalties from Street Gospel because Suga Free brokered a deal with him beforehand which would allow Quik to swagger-jack Sug's lavish blue shirt steez for the cover of Rhythm-Al-Ism a year later in 1998 without flaunting the ‘Thou Shalt Not Buy A Shirt Similar To One Your Boy Has’ rule all bros deep must observe? 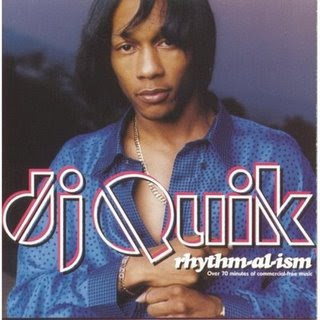 So, as we dip-da to the '010 and we tip-toe to the '011, I guarantee any song I'm likely to hear tonight out on NYE won't make me wanna get my Ralph Macchio at 0:40 - 0:43 of the scene in the Okinawa fifties rock 'n' roll club in The Karate Kid 2 on like Robert Bacon's geetar-work on Quik's We Still Party from Rhythm-Al-Ism does, nor will anything I'm sure to hear tonight get me as open as the "BURN!"s on its hook do. Happy new year anyway, godbodies.
Posted by Kelvin Mack10zie at 10:21

any chance of some Suga Free recommendations or a 'Best Of' comp? All I've got is the very dope 'If You Stay Ready' 12" that I copped after hearing it on a Rectangle mixtape.

Have a good one tonight!

street gospel pisses on post-ultramag kieth from a very large height but - "mommy" is better than anything most rappers will ever do.

'rhythmalism' is an incredible record & probably my most listened to lp for the past few years. happy new yr!

David, the greatest compliment one can pay Rhythm-Al-Ism is that it both lives up to and sounds like it's cover. Best Quik album, imo.

Done, Co-sign Mummy and the whole Cenobites LP. Van Damme ain't got them air-guitar moves like Ralph, though.

Step, Street Gospel (which this and If U Stay Ready both come from) is absolutely essential and it's produced entirely by Quik. The New Testament is pretty great too.

step, the konnektid projects which suga free appears ona lot and is entirely produced by quik is great too:

smell my finger has its moments aswell, so basically his whole catalog ha.

rhtyhmalisms probably the best representation of quik's sound and how much he can vary his style but i think safe and sounds his best work personally. can i eat it and sucka free>>>>>>>>>

"toung condoms are hard to find"

oh anyone seen that "jcvd" film van damme stars in as himself stoppin a bank robbery or somethin?

oh and yeh bobbito had great taste in rappers, cenobites, doom's and juggaknots are some of the few albums from that ny indie era i listen to nowadays

Yeh, Cenobites was class...and it might be a bit obvious but Critical Beatdown (and probably most stuff Ultra did) is far, far >>> than anything Quik or Suga would ever do.

Happy new yeat to all you crumbs.

"Street Gospel" is such a great cd. Check it out, Step One.

Done, Lord Sear too, although he only released the 12" on Fondle 'Em. obv. Co-sign Konnectid but the Quik, Mausberg, and Kam songs are better than the Suga Free ones, imo.

Bozack, Critical Beatdown and Street Gospel and Safe And Sound + Rhythm-Al-Ism are incomparable. All are masterpieces in their respctive lanes. Sex Style and Street Gospel are very similar, though, because Keith was infatuated with Quik's shit, E-40, Mac Mall, C-Bo etc after moving out west and it shows with the whole macked-out synth sound of the album.

apples and oranges i suppose.

it should also be said that both kieth and suga free are probably the two funniest rappers youl ever hear, kieth explainig black baseball and the freestyle where he calls xzibit "everlast" on stretch and bob are comedy.

A Suga Free + Kool Keith song over a Quik beat needs to happen one day.

"apples and oranges" - didn't realise you were a fan of early Pink Floyd, done... or, are you calling Keith the Syd Barrett of rap or suttin?

Wonder if Keith is a Piper At The Gates Of Dawn guy or if he prefers DSOTM? Bet he prefers Animals