Mark that date down in your diaries or on your calenders as they day that the Chambray shirt or jacket/Barry chinos or jeans/Brogues or Sperrys era of male fashion which has dominated both da streetz and internet fashion sites over the last 12 months or so took two to the dome from a killer who bellowed "YU'LL NE'ER TEK UUZ, ALEEVE, COPP-AH!!" and hastily retreated into rural woodland. All y'all off-trend motherfuckers were pronounced dead at the scene before the ambulance even arrived because from this day foward, if you're not sporting a mohawk, a skin-tight sleeveless orange muscle-shirt, black jeans, and white trainers like Newcastle's most famous redhead since Spuggy from Byker Grove then, please, just stay in the house where we don't have to see you and your dated clothing, you repulsive nugget of prarie dog shite. 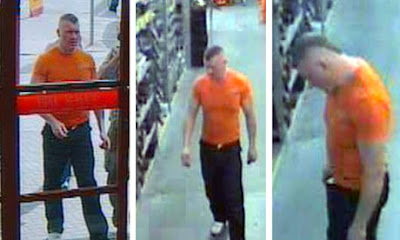 All these hoes take my kids and tell the po-po I'm a brute
/got the spandex t-shirt the same color Tropicana orange juice
Yeeeeeaaaaah!!! - We clap or die, copper

You're probably rolling your eyes and thinking to yourself that the Fashion Po-leese should also take pursuit of Raoul for his soooo obvious and passe Travis Bickle mohawk, and we'd agree with you if we honestly thought some juiced-up ape from Newcastle who lost his marbles over a 'yatch (Money.Over.Bitches, son) had ever seen Taxi Driver in the first place. No, Raoul's mohawk works on the level that he imagines he looks like this :

Oblivious to the fact that he actually looks like this : 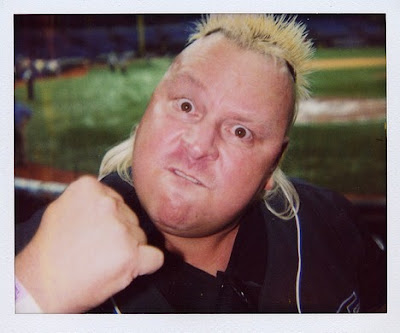 This would probably be a good oppurtunity to post something Cop Killer by Body Count or something by pig-blasting rappers like Cool C or Steady B (preferably Juice Crew Dis or Just Call Us Def), but I'd prefer to end today's post with Wet Wipes by Cam'Ron which simply featured his "no singer, b/sling Heavy D/ready-rock/kill-a-cop, Steady B" line instead.

Email ThisBlogThis!Share to TwitterShare to FacebookShare to Pinterest
Labels: Because Barry it's you, Martorial elegance

Hilarious but he's gonna gonna come out of hiding when he sees this and gun you down. Be shook.

I'd better appease him by quickly doing some crap hip hop based puns :

its got me startin to think he might be doin some andy kaufman spoof thing, i mean tranny prostitutes are one thing but this is hilarious

I turned that off 10 seconds into Juelz's verse because I didn't like the beat.

yeah, its on 'Salute'. I like the beat, which is weird cos usually that kind of thing would annoy the fuck out of me. Might just be because I hadnt heard any Jim Jones ad-libs for a while ("SPOOKY!")

Keepin it Raoul: If I looked like Ed the Duck I too would probably flip and go on some half-arsed revenge spree. Mr Moat was the Vinnie Paz of British gun-toating loonpots. Perhaps if he'd put more effort into executing his paranoic masterplan and far less of the week penning nobbish essays, I'd have some grudging sympathy for the twat. Props to Gazza tho - the best thing a 'roided-up wife-beating paranoic needs is the company of a wife-beating alcohollic certified-psychotic.

frank should have a telly show.

Thanks, Done. How did I manage to miss that moment of genius?

Step, Jim is the only currently active rapper who could possible replace Puffy and Pete Rock as the best ad libber of all time.

CritIQ, Raoul is our new candle in the wind.

Funnily enough I'm wearing black jeans and white trainers today, and when the missus cut me hair on Saturday, we did wonder about shaving the sides and leaving an amount on top. However, I'm not about to shoot anyone in the face, so similarity probably end there.

I was intrigued by the Gazza connection; in the same week he claims to have been mates with Pope John Paul he also turns out to be a fishing buddy of Raoul Moat. What the fuck.

Given the amount of tv crews at the scene, I can't believe that none of them got Gazza on camera.