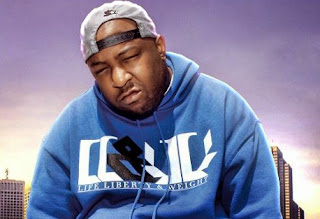 Why does it ALWAYS have to be the important rappers who die? Why can't it be the kiddie fiddlers like South Park Mexican or the psychopaths like Big Lurch instead of the promising upstarts like Speaker Knockerzs and Lil' Snupe, or the legends like Pimp C and Jacka? The erstwhile Shaheed Akbar AKA Dominick Newton earned his own place on rap's Mount Olympus by releasing one of the 10 best albums of the noughties with The Jack Artist and by fathering an entire sub-genre of gangsta-rap which sprawled from Oakland and Sacramento to Ohio and Indiana, so you'd have thought he'd have earned himself enough good karma from this senselessly fucked-up universe which presumably keeps Suge Knight alive because he was partially responsible for the Death Row back-catalogue to live a long and healthy life as an Oakland rap legend in which he could get keep getting fatter and fatter by the year as he'd been doing since most of us first became aware of him after Barney (More Crime) appeared on Cormega's Legal Hustle compilation in 2004.

As someone who grew up loving Slick Rick and Too $hort equally, Jacka's music was catnip to me: melodic but never at the expense of a bassline you could feel in your molars, and vividly written but never at the expense of a catchy tune that'd worm its way into your head. Fuck being hard, Jacka was complicated, which is why immersing one's self in his mammoth catalogue was such a rewarding experience. This was a man who not only wrestled with the contradictory impulses of human psychology on record, he also brought the best out of an otherwise useless pudding like Berner on the two separate albums they recorded together. Thus, the best way I can pay tribute to Jack' today is by gorging myself on a steak this lunchtime and delving deep into his catalogue once again in order to come up with a generic list post of my favourite Jacka tracks. Never blink, never forgotten:

EDIT - an anonymous person came through in the comments with a 32 song Jacka compilation. Download that shit here.
Posted by Kelvin Mack10zie at 13:04

Knew you'd come through on this.

A Little The Jacka Compilation (32 tracks)

Man Ive been playing songs the last while, his catalogue is that deep you could do this all day. Like you could do a whole greatest hits of just Pigeon On A T Shirt, African Warrior, Million Miles, Crowns & Thrones type shit.

Really a tragic one.

This came out of nowhere R.I.P. Jacka

Aye MF, what's that Jacka song where the hook goes: "If you sell drugs then say YEAH, but if you shot a nigga before, don't say YEAH."

i'm really sad right now, fantastic rapper and a bay area legend. I was looking forward to some new releases after the recent mixtape too.

this fucking sucks. I generally don't give a fuck when a well-known person dies but this hit me hard. love the dude's music.
on a bit of a side note: Si Mane, you wrote that you consider "the jack artist" one of the top 10 rap albums of the noughties. i'm curious to know, what would your other nine picks be?

Trap Muzik by T.I., Supreme Clientele by Ghostface, Ghetto Stories by Boosie & Webbie, and Diplomatic Immunity by Dipset would definitely be in there.

Not sure of the rest. Would have to include mixtapes as well.

This is the worst. So sad. Thank you for the thoughtful post.

Any advice on how to unzip the zippyshare mix? Having trouble with that.

Anonymous - where you at?

@ Tom Doggett
About the unzipping,

Does anybody else have a problem with the zipfile?

I'm planning to make many more compilations like this (starting with one to honour/remember the 100Grandonmywrist website).

If anyone has a suggestion for a better zip/unzip program, I'd like to hear.