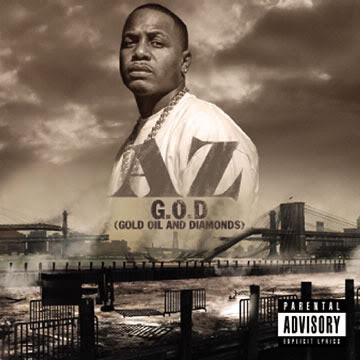 I did detect AZ's modus operandi of releasing 2 indie albums in quick succession with practically zero promotion had a whiff of the Bay Area about it when he put G.O.D out about a couple of weeks after he released the sunday morning dump of an album that was Legendary back in summer 2009, but it's only after picking up a physical copy of G.O.D in a generic outlet village music store's january sale for under two quid that my suspicions were confirmed correct because it was released by Siccness.net and features beats by The Batkave and guest appearances by Bay upstart Smigg Dirtee. One of the most conservative old man NY rappers who had beef with the Ambassador Of The Bay shacking up with the offshoot label of northern California's most infamous internet hub of Gangsta-Rap which began life as a Brotha Lynch Hung message board appear the least likely of bed fellows at first glance, until you cotton on that Siccness is distributed by the new E1 Entertainment pseudonym Koch are now lurking under and that they've been diversifying the Siccness brand into the east coast market with low-rent indie albums by DMX and Keith Murray as well as a couple of cheap but very effective releases by Beanie Sigel and Beanie & Freeway, which'll suffice as modern postludes to the two State Property group albums quite nicely for the time being.

Even though a cursory listen of G.O.D had me dismissing it as AZ's 2nd Veteranz Day style point-of-no-return in the space of a month, my CD collection contains such dubious albums as Can't Hold Back by Ice Cream Tee, the Tonka Boyz abortion, Crime Mob's 2nd CD, Veteranz Day itself and now this due to the possibly farcical reasoning that it's cheap and future revisitations may well reveal, if not gems, then rhinestones of the finest quality, and investigating it more thoroughly now by jamming it properly via a Hi-Fi/car stereo instead of skimming through songs on laptop speakers while watching clips of Ravishing Rick Rude pwning the Big Bossman's mother one has to concede that there are three joints of Anthony doing what Anthony does best by effortlessly locking into the pulse of some unexpectedly lavish beats with his seamlessly fluid flow on there : Hustle In My Blood doesn't ascend to the heights that a song which features him rapping over a cover of Stevie's Part Time Lover (someone plz ID who the cover is by) should in theory but it works just fine all the same; album highlight Live Your Life really should've been stashed for the 15th anniversary Doe Or Die project because it has the feel of a low-budget-but-still-wavy Sugarhill about it; and while Get Low with Smigg Dirtee isn't exactly Phone Tap or The Essence the two rappers manage to impart a sense of chemistry between them when they go back-and-forth and finish each other's lines on the second verse over some pretty luscious guitar squalling, which I'm chalking up as a notable victory since guitar samples are a notoriously dangerous animal for rappers to befriend, and Smigg says "then murder dog with a magazine" which I thought was quite witty.

A Google search informs me that there's one last Bay Area twist in this tale, with G.O.D's original title of I Am Legendary (it was billed as this to pre-order on Amazon at the time before being switched a week or so before the album leaked) ending up on the rap-album-title scrapheap alongside Don't Be A Faggot by the Beasties (Licensed To Ill) and Starved Bandit by DJ Quik (Safe & Sound) due to its similarity to AP.9's also-summer-2009-released I Am Legend, and if a traditionalist New Yorker like AZ can drop an album through Siccness then we've reached the point where Rap is virtually limitless in possibilities, so I'd like a trans-regional jailbird possecut by Cool C, C-Murder, Max B, Lil' Boosie, South Park Mexican, and Tragedy Khafafi over some beatboxing by Big Lurch, and a The Firm 2.0 consisting of AZ, Jacka, Husalah & Cormega with at least one song where Jacka assumes the position of Nas on Gimme Yours and delivers a gloriously off-key chorus.
Posted by Kelvin Mack10zie at 09:17

I feel like this is some serious blog journalism right here. I am only vaguely aware of who AZ is, Siccness has definitely put out some random releases.
San Quinn was supposed to come out with an album titled G.O.D. as well, but I haven't heard anything about that in close to a year.
Smigg Dirtee is tight though, that guitar sample was also used on "Born 2 Lose" off the Devilz Rejectz 2 album.
Jacka's off-key choruses FTW always.

Aha. Yeah, I recognised that guitar but couldn't place from where. Someone needs to ID that sample too.

Siccness even put out an album by Haystak and there's 2 amazing songs on it.

Do an AZ comp next?

One of those Decade compilations of his would probably be a better starting place than anything I could put together.

that nigga az gay baby lost whatever ties he had to the bay when he dissed 40 water.