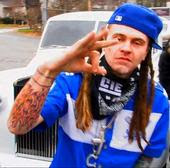 If you recall my post about the Youtube response to Codename by White, debate raged over whether the colour of White's beard was caused by his near-geriatric age, his alledged diabetes, or some sort of traumatic incident which rendered him prematurely grey overnight a la Leland Palmer, but this otherwise boring video of rappers droning on about weed I found recently complicates matters further as we learn that his beard is now both grey and brown?

While the jokebook overfloweth with quips about White being a stunt-double for Leprechaun In The Hood, his continued dropping of N-bombs (is Slick Pulla okay with this?), and Jeezy apparently not wanting to be seen with him in public, I feel we should also acknowledge that White is the nethermost fantasy of every caucasian rap nerd trudging through life bound by the antiquated rules of polite society. I'm all for cracking a few jokes about rappers, but, yo, let's discontinue the pretense that the supressed alter-ego of White isn't lurking deep inside each of us like a dreadlocked Mr Hyde with a speech impediment just waiting to be awoken by a magical potion of affluence and the acceptance of thugged-out black gentlemen. Or, indeed, a couple of drinks too many in a nightclub after listening to Project Pat as you were getting ready.

Jeezy's Air Forces didn't get an official sequel until last year, but this stop-gap came out on some Yukmouth album in 2006. If you can keep a straight face when Yuk attempts Jeezy's patented "THAAA'S RIGHT" plus "YEEEAAAAH" ad libs and brags about fittin' a quarter of a mil' in "these Makavelli jeans" then you're made of sterner stuff than me, and he apparently just ganked the concept of rapping about Jordans over Jeezy's Air Forces beat from a little-heard cut by the Texan group Dirty South Rydaz (why's that song suddenly vanished from Youtube the moment I need to hyperlink it?), but I quite like this since it successfully captures the spirit of the original while managing to add a dash of the Bay to the proceedings, and, much like White's Codename, you should never oppose the dubious charms of any song which can cause you to laugh like a drain.
Posted by Kelvin Mack10zie at 18:58

"let's discontinue the pretense that the supressed alter-ego of White isn't lurking deep inside each of us like a dreadlocked Mr Hyde with a speech impediment just waiting to be awoken by a magical potion of affluence and the acceptance of hard black gentlemen. Or, indeed, a couple of drinks too many in a nightclub after listening to Project Pat as you were getting ready."

You've never ended up strutting around the club with your tie around your head thinking that you're Juelz in the Santana's Town video?

I can't even get drunk properly anymore. Rap has put too many ostentatious notions in my brain which surface with the help of too much vodka.

regular white posts should be a thing.

and is it just me or is yukmouth a bit shite? admittedly i never really heard any luniz song apart from got 5 on it and that one from the dont be a menace soundtrack with shock g so maybe i dont know him well enough but jesus hes painful on any recent song i heard. above songs hilarious tho.

ha i just clicked on your profile man, please tell me he has a mixtape.

LF: Fabolous was just always coring to me. Never was a fan, even on the Clue tapes.

Yeah, HL, it was time for a name switch.

Done, Yuk is obviously long past his best now, but he definately had joints when he went solo.

I think White has a mixtape coming soon. I certainly hope so, because I need an mp3 of Codename like Boosie needs a better lawyer.

Re : the Waka parody video; so, I guess we finally have a black Weird Al then, huh?

What are you favorite solo Yuk joints?