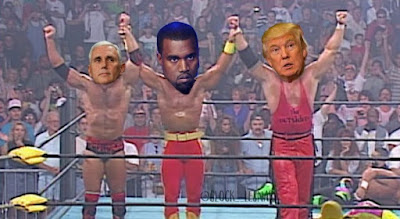 Obligatory wrap-up post of those songs I've played most during the month when El Chapo probably should have hired better hitmen.

Other notables: the new ATCQ album sounded like a late-career Beastie Boys/plastic-rastamon Run The Jewels hybrid so I'll make like Mesut Özil and pass; Nef The Pharaoh's Put You On isn't essential but it's a step back in the right direction; the remix of Uncle Murda's Cam'Ron Voice really didn't the presence of its namesake in 2016; Boosie & Lil' Scrappy's No Drake On is a sentiment to live by even if the song isn't particularly good; Yung Cat's 30 On Me is a good example of why regional mob rappers should lay off the Auto-Tune; Ask Around is one of those WNC tracks where Trel Itz A Hit's production outshines the rapping.
Posted by Kelvin Mack10zie at 15:51

Riding for both No Drake On sentiment and the song itself; didn't think a Scrappy verse would get me open in 2016 but hey. Feeling most of Boosie's sad songs this year despite some mixing issues but it's cool to get murder music from him as well. The new album is weaker than the previous few but he has a Santa hat on so people (20 rap tweeters) are paying attention it seems.

What are your thoughts on Penitentiary Chances? Might be my #1 2016 album it's the best prison doc out there. C-Murder averages 1 suicidal bar per verse I get chills every time I put this on

I never heard that album.

I just want Boosie to make songs over Mouse and Trel Itz A Hit beats.

I hadn't heard the Camp Lo song before either ha!

In our defence, it is from some insanely raer white label 12".

Is peep the steelo the best song with wack scratches? Or does Eric B still rule supreme?

That Beanie song tho. Anyone have an MP3?

Eric B reigns supreme over everyone, no need for a nearly.

Beanie song is on Amazon/iTunes etc.

Far as lo fi new Boosie goes that Penitentiary albums the shit, C-Murder sounds good af too. You have to edit it down obv and idk if theres anything as good as Problem or They Gonna Miss me or w e but him and Boosies rappings at their most conscious Death Certificate focused. C rly surprised em actually.

Far as fuzzy prison vocals go, this album>>>>> X-Raided & Back N Da Hood. Its ridiculous some of its sounds better than his recorded outside shit ffs, possibly cos an engineer had a look for once.

Never forget the time C-Murder recorded a verse from prison for A-Wax.

Whoa is all his prison shit that decent quality? Id no interest in checking cos I assumed it was all phone-ins. Never got round to that A-Wax & Gonzoe album either.

He's either occasionally allowed to record music in prison or he's doing a Vybz Kartel/Lavish D and sneakily recording verses on illegal cellphones.

Yeh they did most the boosie album w snuck in phones. Nice Ill have to check out these C-Murder albums.

^ And does anyone happen to have a copy of said A-Wax f. Gonzoe album?

Ain't heard Woptober. Only track I liked on Everybody Looking was Guwop Home and Gucci accounted for 10% of what's so good about the song.

You should message Ackbar for the A-Wax & Gonzoe album, Yohan.